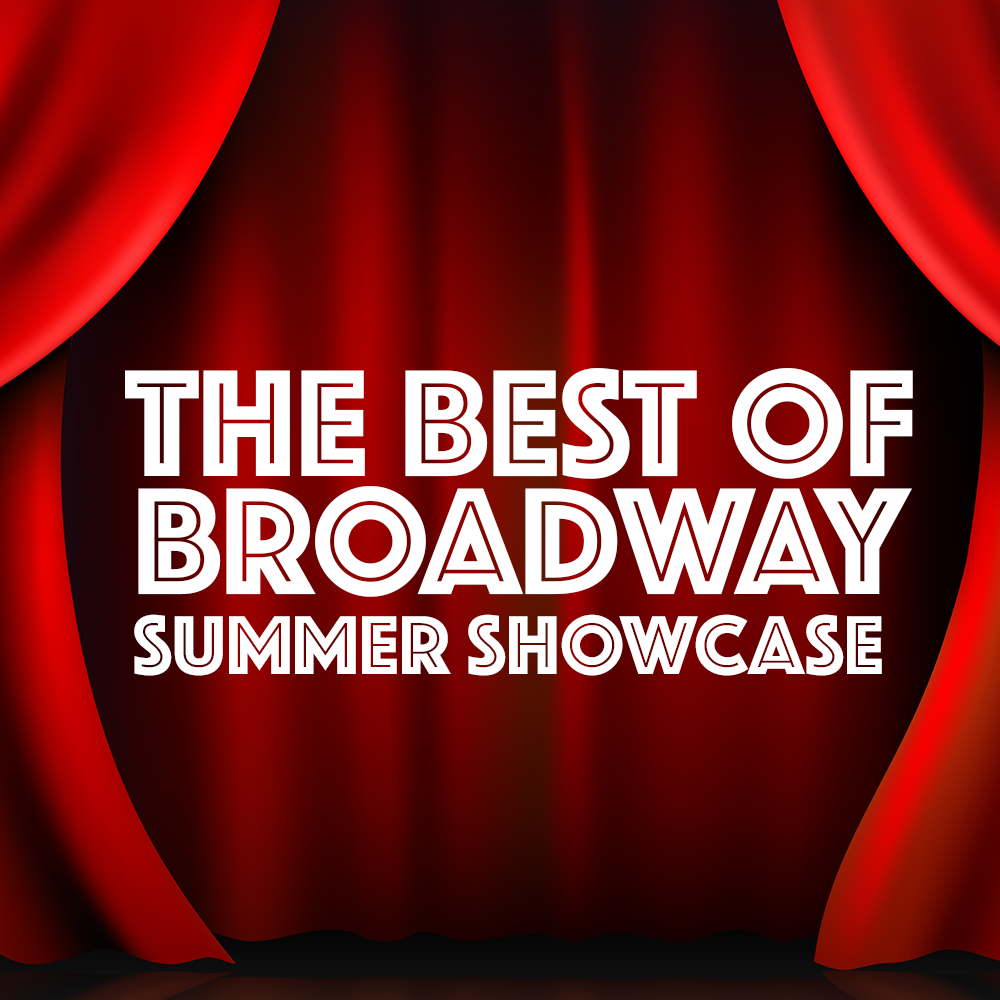 Join a cast of FWP all-stars as we celebrate 90 years of Broadway’s great musical moments! From 1930 to the present, a tuneful journey through theatre history. Reserve your seats to this amazing one week only event!

Debbie Cascone is thrilled to be making her debut with Francis Wilson Playhouse! Past shows include: Oklahoma (Ado Annie), West Side Story (Rosalia), Pirates of Penzance (Ensemble), How to Succeed in Business (Understudy Rosemary/Ensemble), Kiss Me Kate (Understudy Bianca/Ensemble). Special thanks to all at FWP, as well as to her husband and son for their support in getting back on the stage!

Nathan Daugherty (Musical Director) is glad to be back for another summer at FWP in our BEST OF BROADWAY showcase! You may have seen him last as Freddie in Chess or The Baker in Into the Woods. This show marks Nathan’s 31st concert/showcase at FWP in the last 9 years! Nathan is the concert musical director and handles all marketing for the theatre! Thanks to Jason, Taryn, Emi, and the rest of the FWP staff. Shout out to Kimmie, Dan, Paige, Lucas, and his family. Enjoy the show! NathanDaugherty.com or @NathanSingsALot on instagram.

Liz Hill loves being on stage, and is thrilled to be in her fifth production at Francis Wilson!  She is honored to celebrate Broadway and start off FWP’s 90th season with a bang! When not on stage, Liz spends her time working as a Behavior Analyst for a non-profit in St. Pete. Love to her husband Ethan and this talented cast and crew!

Taryn Holzhauer is thrilled to be involved in another rag tag group singing some of her favorite tunes. This is her sixteenth concert! You may have seen her recently as Eileen Evergreen in Nice Work If You Can Get It, as well as The Baker’s Wife in Into the Woods and May Daniels in Once In A Lifetime. Enjoy the music, folks!

Francesca Guanciale Jay was last seen in NICE WORK IF YOU CAN GET IT (Duchess).  Some previous shows include INTO THE WOODS (The Witch), IT SHOULDA BEEN YOU (Judy), CURTAINS (Georgia), COMPANY (Joanne), FIDDLER ON THE ROOF (Golda), SECRET GARDEN (Lily), and HELLO DOLLY (Dolly).  She would like to thank her family for supporting her theater habit (131 shows and counting).  Welcome to the show.

Skylar Jay is thrilled to be gracing the FWP stage again after her hiatus following her performance in last season’s Into the Woods as Rapunzel. By day, Skylar is a student and aspiring visual artist. She would like to thank her friends and family for all their love and support and she encourages you to support your local artists! Please give her a follow on Instagram @accepted_value.

Ezra Joel is very excited to be a part of this wonderful summer showcase! This is his 2nd summer show at Francis Wilson Playhouse. You may have recently seen him in Nice Work If You Can Get It, The Little Foxes, and Broadway in the 40’s. He would like to thank his family and the boys for everything! He hopes you enjoy this beautiful production.

Elizabeth Kielty is thrilled to return to the FWP. Having previously performed in the 2018’s Holiday concert & 70 Girl’s 70 here. She appeared in several productions at the Spring Lake Community Theatre in NJ.  With some favorite roles having been; Mrs. Sowerberry in Oliver, and Bird Woman in Mary Poppin’s.  Has taken numerous Master Classes with the likes of Joanna Gleason, Donna McKechnie, & Alice Ripley, etc.  Many thanks to both Nathan and Jason for all of their encouragement and hardwork.  To her fellow singer’s and crew, it’s been a pleasure to go through this experience with all of you talented and fun people. XO’s

Tammy Lukas is excited to be apart of this showcase!  She recently played “Svetlana” in Chess here a FWP and will be Stewardess Robinson in Titanic as well.  Tammy played “Heather Van Pree” in Nana’s Naughty Knickers at JFL Dinner Theatre this year as well as Grande Dame/ Understudy for Bombshell in a locally written musical revue “I Enjoy Being A Girl”. She also married the love of her life, Jeff Lukas, in October after meeting in a production of the Addams’s Family musical a few years ago.  She has a beautiful & smart daughter, Scarlett, who is getting to be so grown up entering the 5th grade in the upcoming school year!! Thank you to her family and friends for all their love and support over the years. Love ya B 🙂

Heather Lyn Mackey is excited to be back at the Francis Wilson Playhouse for her first concert. She has previously been seen in Chess (Ensemble), Into the Woods (Cinderella’s Mother), and Carousel (Arminy). She is currently studying theatre performance at St. Petersburg College and will be receiving her degree this winter. Heather has also been seen on the SPC stage many times. Her most notable performances include Dotty Otley (Noises Off), Golde (Fiddler on the Roof), Nick Bottom (A Midsummer Night’s Dream), and Sherry ( The Amish Project). Heather would like to thank her friends, family, and her theatre educators for supporting her through her career. She hopes you enjoy the show!

Georgie Manera is thrilled to be working with this incredible company for her 2nd production with FWP since moving to Florida in August! She has been a part of 22 stage productions in the Philadelphia area, and some of her favorite roles have included Pennywise in Urinetown & CB’s Sister in Dog Sees God. When she occasionally sets foot outside of the office, she’s either singing or thinking about going to the gym.

Erika Meya is too excited to be making her first appearance at Francis Wilson Playhouse singing and dancing in The Best Of Broadway Summer Show Case.  Some of her favorite past roles were Catherine in Pippin, Shelby in Steel Magnolias, Gayle in Almost, Maine, Peter Pan in Peter Pan,  Lucy in You’re a Good Man Charlie Brown, Grace Farrell in Annie, a cast member in How to Succeed in Business, and as a chorus member in Oklahoma.  She would like to thank her family, friends, fellow cast members, and the director for their encouragement and support. Thank you for coming to see our show.

Anne Mickel is immensely excited to join FWP for the first time in our Best Of Broadway Summer Showcase! She hopes you enjoy the show as much as she’s enjoyed sharing the stage with so many kind and talented people. Thanks to the FWP staff, friends, and family.

Jonathan O’Brien is an aspiring composer and actor born and raised in St.Petersburg! His notable credits include Ernst (Spring Awakening), Ensemble (Chess) and Charlie Brown (You’re a Good Man Charlie Brown). Jonathan would like to thank his family and Mary for their love and support. Instagram @johnny0b

Sarah Rowell is very excited to sing some beautiful songs with some amazing people. She thanks her friends and family for all the support, especially her mom for dealing with the constant practicing. Enjoy the show!

Emily Szymanski is thrilled to be spending her summer in her favorite place: Francis Wilson Playhouse. Following the Showcase, Emily will be appearing in Titanic. As always, much thanks and love to the amazing FWP production team and to her family.

Wil Toro is glad to be here for the opening of the 90th season of this gem of a theatre. He has previously been in Chess, Joseph and the Amazing Technicolor Dreamcoat, and It Shoulda Been You and is looking forward to Titanic. He is glad to able to share the joy and magic of Broadway with you. Let’s Go, On With The Show!

TJ Venieris is thirlled to be partaking in this smashing showcase! He has been seen in many FWP productions such as Into the Woods, 70, Girls, 70, Funny Money, Nice Work If You Can Get It, and Chess. He also has appeared in several Broadway concerts. He thanks his family, Jason, Nathan, and the cast and crew for all their continuous love and support. He dedicates this showcase to his special friend Leah and her family.

Christopher Walkey is making his first appearance at FWP.  He was a lead performer with San Francisco’s famous Lamplighters Music Theater where his roles included Ko-Ko in The Mikado, Jack Point in Yeomen of the Guard, Orlovsky in Die Fledermaus and Freddy Eynsford-Hill in My Fair Lady.  Other roles included Njegus in The Merry Widow at Pocket Opera and The Beadle in Sweeney Todd at Alameda Civic Light Opera.

Amanda Wood is thrilled to be back on the stage at FWP with this amazing cast. She was last seen in the recent production of Nice Work If You Can Get It. Amanda would like to thank her husband for his love and unwavering support.