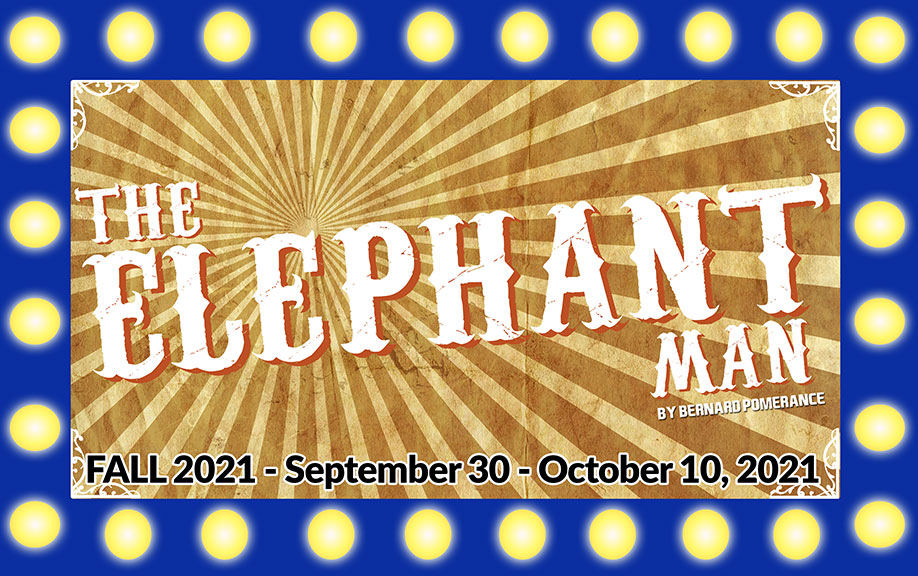 Winner of the Tony, Drama Desk and Critic’s Circle award for Best Play, this long running Broadway and London hit tells the tale of John Merrick, a tortured sideshow freak who found friendship and acceptance in Victorian high society. This moving true story uses stage theatricality to tell a story of personal strength and kindness, where good can overcome evil and the indomitable human spirit can prevail.

Shannon Tiberius Luster (John Merrick) – Shannon was last seen on the FWP stage as Jim the sassy New Yorker in Brigadoon as well as Henry Perkins in     Funny Money. He has also appeared in over 20 Shakespeare productions in the USA, Canada and Australia. He shared his passion by spending 2 years traveling the Alaskan “bush” in tiny planes teaching Shakespeare to rural communities. He is honored to be working with Jason Fortner and the talented cast of The Elephant Man.

Peter Barlow (Dr. Frederick Treves) – Peter couldn’t be more thrilled to return (at last!) to the Francis Wilson stage with this beautiful drama. He made his      Playhouse debut back in 2019 as John Thayer in the gargantuan Titanic, and  later trod the boards as Tommy Albright in Brigadoon, Francis Wilson’s last    production before the long pandemic hiatus. Many thanks to all of you for returning with us to the joy of a live performance…It’s so glorious to be back!

Rick Kistner (Carr Gomm/Conductor) – Rick is excited to be back on the boards after a pandemic hiatus of 18 months. A performer since age 16, he has         transitioned from chorus to juvenile lead to leading man and now senior character parts. Favorite roles include Fagin in Oliver!, the King in The King and I, Henry Higgins in My Fair lady and Billy Flynn in Chicago. Elephant Man marks his 21st show at FWP. Thanks to Jason and love to Karen, the kids and grandkids.

Ed McNally (Ross/Bishop How) – Ed is excited to be in another production at Francis Wilson Playhouse. You may have seen him in Les Miserables, Sweeney Todd, or even Titanic. Enjoy the show!

Callie Gray (Mrs. Kendal) – Callie is thrilled to be back at Francis Wilson! Last here in Brigadoon, and recently Tarpon Arts as Truvy in Steel Magnolias. She thanks Jason for this incredible opportunity, and to Lisa Malloy for giving her wings. She is amazed by the talent in this cast! She’s dedicates this show to her family and friends, and Suzanne Ruley. “You are so much more than your physical appearance. You’re a beautiful soul with a beautiful purpose”.

Daniel McKay (Manager/Duke/Will) – Daniel is excited to “get back to it.” His former favorite appearances on our stage include: MacGregor in                      Brigadoon; Dr. Sanderson in Harvey; Jigger in Carousel; Bill Ray in On Golden Pond; and Rudolph in Hello, Dolly! Other favorites include Al in A Chorus Line with EOT and Sam (and choreographer) in Bingo: The Winning Musical at WCP.

Matthew Howard (Policeman/Lord John/Snork/Others) – Matt is delighted to be making his community theater debut in The Elephant Man. However, he is no stranger to the stage, and was active in his high school theater department from 2002-2006. Credits include Neil Simon’s Fools and God’s Favorite. Matt has a Master’s degree in social work, and enjoys working as a mental health counselor. He would like to dedicate his performance to his mother Debbie who taught him to always live life.

Shelly Fowler (Miss Sandwich, Pinhead, Countess) – This is Shelly’s second appearance at FWP. Her debut show was as Mrs. Chauvenet in Harvey. Shelly acted all through school and used her acting skills while performing on the Great Movie Ride at Disney. Shelly is excited to join the cast of the Elephant Man. She would like to thank the director Jason for continuing to take a chance on her and this uniquely special cast & crew for making this an amazing experience.

Niki Kissell (Princess Alexandra/Pinhead) – This is Niki’s first appearance at  Francis Wilson. She previously performed at the McConnellstown Playhouse in McConellstown Pennsylvania. Her last production was Godspell in 1999, so she is thrilled to be back on a stage. Favorite roles included Agnes in Agnes of God, Sister Mary Leo in Nunsense, Miss Casewell in Mousetrap, and Wilbur in Charlotte’s Web.